Lami has defended himself, following the mixed reaction that trailed report of his breakup with Big Brother Naija star Jackye Madu.

Reacting to this in an Instagram post he shared, Lami accused his ex-girlfriend of exposing his flaws in public and allowing people who don’t know him to judge him. He stated that he has counted his losses and moved on because he won’t bring down what he “built passionately and with love”.

Let me address this matter once & for all; For those writing & tagging me with negativity, understand I am not pained, I have counted my losses & moved on but ur negative energy require a check. See bad boys love too & I go all out & give everything such that I become vulnerable but in my vulnerability I’ve found strength. I am not my past, I am my growing presence & we all have our flaws and mine is been discussed in the public because my ex exposed it & people who dont know me just judge me wrongly.

I will never discuss the ex in public because I will not use my hand to try to bring down what I invested in building passionately and with love but how can ya’ll tag me the villain not seeing or mentioning the great works I put in for the subject for years, even the subject no go talk true again as she don scatter my plans in Omahlays Voice and says a-lot about how human beings can really be ungrateful. How come I am a bad person for seeing something that is obviously good on TV and mentioning it on my page. Ya’ll want me to be a hater, na am lover not a fighter & I always add value.

I am an entrepreneur who goes hard for his team, customers and partners but the truth is some people aint loyal, break that into many reasoning. To all of you who have been saying things u dont know, this narrative shouldn’t be coined one sided because there were many good times & people who know me closely know how I carried my now ex for head like hair but na she call me cheat publicly wey make una dey tear my name apart unjustly without ya’ll asking her about my advantages for 6+ years.

Wait o did you hear me say anything bad about her? So why say I am pained when actually am very happy & joyful today.

Lami added that he will always “root for Jacquelyn’s win wherever she is and whoever she’s with.”

“I will always root for Jacquelyn’s win wherever she is & whoever she’s with. I’m now openly single after 6 years+ experience therefore serious candidates apply” 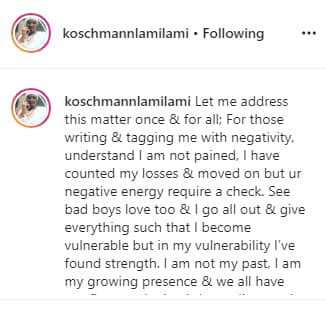